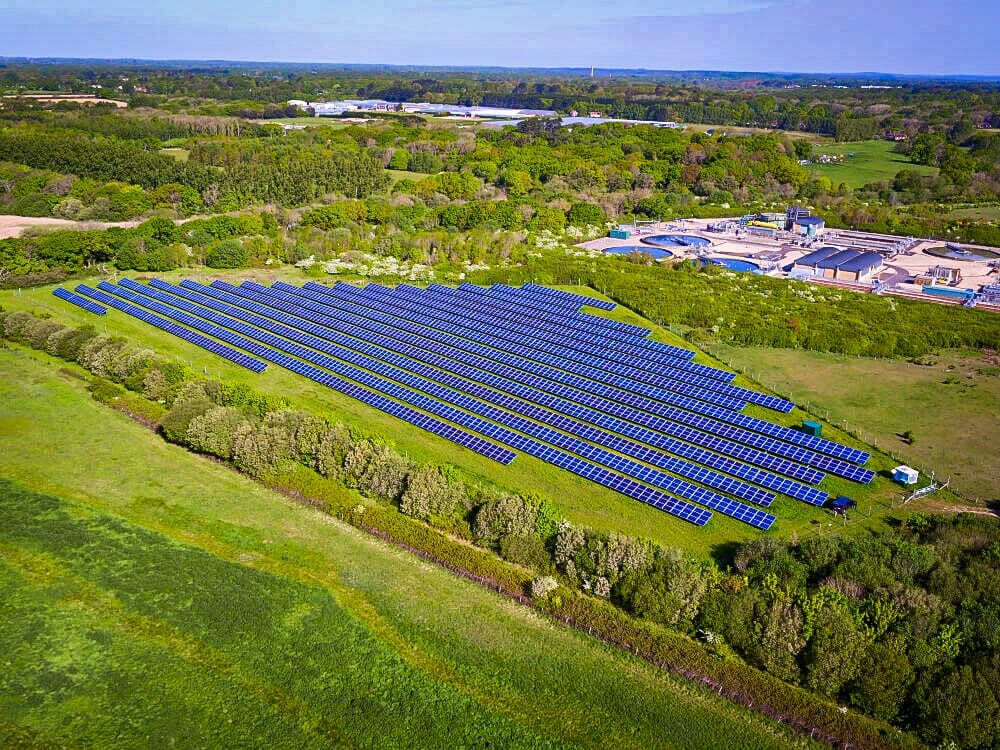 Behind The Meter Renewables

Behind the Meter Renewables

There are lots of technical terms within renewable energy. The purpose of this article is to explain what benefits behind the meter renewable energy generation gives to commercial energy consumers, but also what the key issues/challenges the project developer faces when trying to deploy such projects.

What does behind the meter mean?

Just like the energy meter we are all familiar with in our homes, large commercial energy consumers have a similar arrangement. A boundary meter is located between their own electricity network and the UK grid network which monitors how much energy is consumed.

What are the commercial benefits?

When connecting behind the meter, the power produced from the energy project, e.g. Solar PV or Wind, flows directly to the customer and offsets the site’s consumption. If the site was consuming 2MW and the energy project was producing 2MW the boundary meter would record zero MWs of electricity. The grid is effectively oblivious to the facilities need for power at that moment in time.

Any time the renewable generator is producing power the consumer’s boundary meter reading is reduced and can even be zero if the amount of power generated matches or exceeds the site consumption.  The reduction in consumption through the meter will directly lead to a reduction in the customer’s utility bill.

This quickly leads toward 2 key questions:

So how do we work this out?

Solar lends itself well to behind the meter arrangements as it is relatively low cost and can be sized according to requirement. 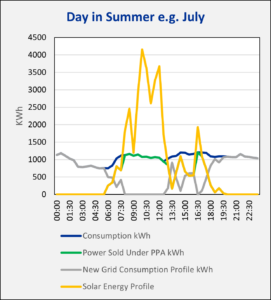 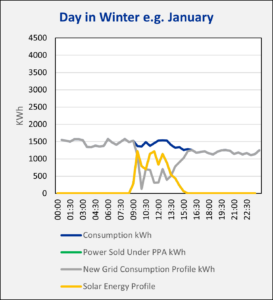 So what does it all mean?

There are two key components:

The generation on a daily basis (Yellow Line) can be volatile due to local weather which affects how much and when energy is delivered to the customer.  The customer energy consumption profile also plays a large part in how much energy can be delivered, some consumer profiles lend themselves much better to private wire solar than others.

Anything not consumed by the facility needs to find a route to grid. In the graphs this is the difference between the Yellow and the Green lines

Securing Export capacity is key not only so surplus power has a route to grid but so if the off taker stops consuming power for whatever reason the project is still able to generate. Project risk is something that is baked into the energy price and investor returns. A higher risk project needs to pay back faster than a lower risk project.

If a grid export connection can be obtained e.g. 2MW the solar installed capacity will not be sized identically e.g. 2MWp as the solar system is rated to produce 2MW under ideal conditions (hence the MWp (Mega-Watt-peak). The project will be oversized so a larger volume can be generated with only minimal curtailment losses, however this is only true until a certain point where additional Capex does not add additional project value. This is mainly a result of losses becoming too significant to warrant the extra capex. The extent of the oversizing is an optimisation problem and is determined by our modelling or the; consumer consumption profile, grid export connection and project financial risk.

As this behind the meter energy does not pass through the grid (DNO network) the consumer is not liable to pay non-energy costs on this power, resulting in significant financial cost savings on this proportion of energy. This can be anywhere from 0-100% of the facilities consumption annually, the remaining facility consumption would come from gird or other energy projects.

Customer balance costs will change but the value create by agreeing a private supply allows for their the be significant savings even including the higher balancing costs.

There are several key inputs/issues to resolve before a project can be develop. We have worked hard at Novus to understand how to successfully deliver these projects and have a keen appetite to deploy additional private wire projects in the UK in the coming years.